The workshop will take place in Cercedilla, Madrid, Spain, during June 14th-17th

The workshop will be take place at Cercedilla (Madrid), which is a small village in the mountains, near Madrid. 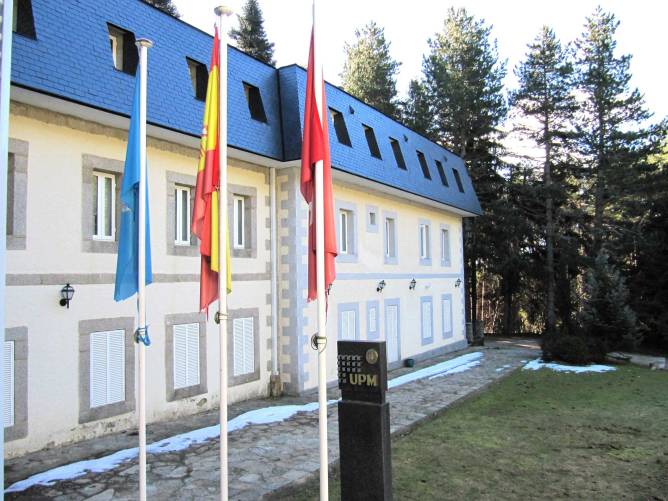 The event will take place at the Residencia Lucas Olazábal of Universidad Politécnica de Madrid, which is located in Cercedilla, in the forest of the Sierra de Guadarrama, in a place known as Las Dehesas de Cercedilla, which is 50 km away from Madrid, and 15 km away from Navacerrada.

Going to Cercedilla from Madrid-Barajas airport

Taking the train to Cecerdilla

If you reach to Terminal 4 in Adolfo Suárez Madrid-Barajas Airport
Go to the train station and take line C1 to Chamartín. Then take line C8B to Cercedilla. Train company in Spain is RENFE.

Getting to the Residence From Cercedilla

Furthermore, members of the summer school will be giving directions of how to get a taxi on the train station.

Going by car to the Residence

From Madrid, motorway A-6 until the exit El Escorial, Guadarrama. Take direction Guadarrama until crossroads with the old N-6 (it is a crossroads with traffic lights where you can see El Piquio Hotel). Turn left and cross Guadarrama village until Cercedilla indication (it is a road on the right, next to a headquarters). Go straight on road until Cercedilla. When you pass the Cercedilla’s train station, go straight on next crossroads Las Dehesas – La Fuenfría direction. When you arrive to forest information turn right following Residencia Lucas Olazábal UPM direction.